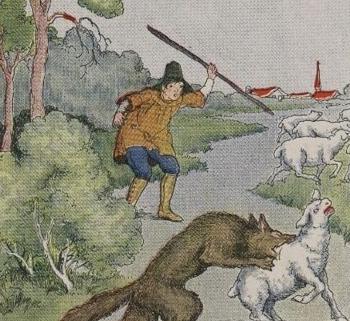 There once was a farm boy named Jeffrey who liked to play much more than he liked to work. One day his father came up to him and announced “Jeffrey, you’ve reached the age where you can help me work the farm. The first thing I want you to do is to start tending to the sheep.”

Jeffrey didn’t like this idea at all. Tending to the sheep meant long, boring days in the fields just watching them. This meant time not spent playing with friends.

“Awe, come on Dad! Do I have to? I’m still only nine and John is already twelve and he still doesn’t have to do any work at all!” whined Jeffry.

“Even if you don’t understand this right now, you will when you’re older. You’re my son and I want you to grow up to be a responsible adult so that’s why I want you to do this.”

At this point, Jeffrey knew there was no sense arguing with his Dad. Jeffrey went back to playing, realizing this would be his last carefree day before his work days began.

The next day, Jeffrey awoke to his father shaking him awake. “Come on, rise and shine! You have to tend to the sheep today!”

“But Dad, it’s still dark outside! The sheep can wait until it’s bright outside!”

Jeffrey’s Dad simply said. “Meet me downstairs in 10 minutes.” and closed the door. Jeffrey knew there was no sense arguing. He dragged himself out of bed, got dressed, and made his way downstairs.

Jeffrey’s mom had prepared him a nice breakfast which he ate quickly.

He then went out to the pen where the sheep were kept. His dad was waiting for him.

“OK, you have all you need. Take the sheep out to the field just this side of the stream and watch them. Take extra care in looking out on them though. Farmer Joseph told me that he’s seen a wolf lurking around this area recently. If you see it, yell and we’ll come running and make sure we take care of it.”

The thought of a wolf scared Jeffrey a bit, but he had never seen one so thought the chances of encountering one was pretty low. Taking his staff, he started on his way to the distant field as the sheep trailed behind him.

Hours passed and Jeffrey was getting bored. He’d been watching the sheep for what seemed like an eternity. Tending sheep was a lot more boring than playing with his friends, he thought.

To pass the time he practiced throwing rocks at trees, chasing sheep for fun and trying to get in small naps.

He eventually ran out of all even mildly entertaining activities. As he was gazing up at passing clouds, a devious thought crossed his mind.

“I know how to make this day a bit more exciting… I could fool them by saying a wolf is here and they’ll all come running!”

So that’s exactly what he did.

“Wolf! Wolf! Come quickly, the wolf is here!” He immediately heard the town bell ring and saw the men of the village start to run toward him. Within a couple of minutes, they had arrived.

Jeffrey started laughing uncontrollably. “I was joking! You should have seen your faces! You were all so scared and now you’re out of breath. Haha.”

The men were not pleased. Big Jim exclaimed, “Do Not do that again. This is a very serious matter. I wasted my time coming up here and have a lot of work to do myself.”

The men departed for the town and grumbled most of the way back.

For the rest of the afternoon, Jeffrey periodically chuckled to himself, remembering the “funny” joke he had played.

As the hours passed, Jeffrey started thinking, “Boy, those guys’ faces yesterday were hilarious!” Then he again thought of being naughty.

“I should fool them again and tell them the wolf is here. I just love looking at their faces.”

So again, Jeffrey cried “Wolf! Wolf” Again, the town bell rang, and again the men of the town scrambled to the field where Jeffrey was staying with his sheep. This time his father was with the men.

His father asked, “Where is the wolf, Jeffrey?”

“Um, I was playing a joke, father. There is no wolf.” At that point, Big Jim yelled “Yeah, and he did the same thing a couple of hours ago! He’s costing me time and money with his nonsense. You’ve got to do something with your boy!”

Jeffrey was ashamed and even scared about what may happen to him when he got home. He hid his face as the grumbling men departed.

You Reap what you Sow

Time passed, and it was near the end of the day. Dusk had hit and he was having a hard time seeing some of the sheep. He knew it was time to go back home.

Just then, he heard two sheep “baaaing” very loudly and running. The wolf! It was bounding from the nearby forest right toward his sheep!

At the top of his lungs, Jeffrey yelled “Wolf! Wolf!” But there was no town bell ringing or men running toward him.

Inside the town, the men heard his yells. They assumed Jeffrey was trying to trick them again so just continued their work. The tall man said “How foolish does he think we are? He already fooled us twice. It certainly won’t happen a third time!”

Jeffrey tried his best to fend off the wolf but it was no use. By the time darkness fell the wolf had killed and eaten half his sheep. With a full belly, the wolf returned to the forest.

Exhausted and distraught, Jeffrey sat down in the middle of the field and cried.

Don’t lie because it hurts your reputation and causes people to distrust you.

The Ant and The Grasshopper