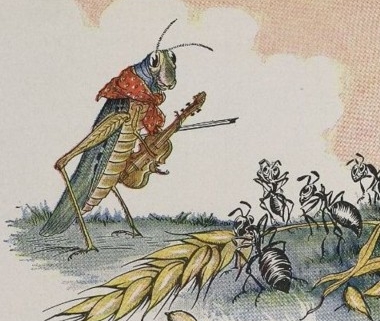 It was a warm summer day and the ant colony was busy. Ants were everywhere: gathering twigs, small bits of garbage and other items that would help them survive the winter.

An ant named Andy was working very hard that day. He had already made ten trips back and forth to the garbage dump, and it was only noon! As he started on his eleventh trip, he observed Greg the Grasshopper playing in the field below. Andy had seen Greg doing that type of thing for many days now and did not approve.

Andy shook his head in disgust. Greg saw Andy looking at him and quickly hopped over then exclaimed “Poor Andy, you never have any fun! Why work all day? Don’t you see the sun is shining? I get to play all day while you work hard and get tired. That seems rather silly doesn’t it?”

The ant knew better though. “Greg, what will you do when you need supplies in winter?” Greg was taken aback, while Andy continued. “Sure this is not easy, but I know that by pushing myself and working hard, I’ll be able to take care of myself and my family come winter. Just knowing that keeps me going.”

Andy then said, “Not only that, it feels good to work hard sometimes. Working hard on something is the only way you get physically and mentally strong.”

Greg wasn’t buying it. “I don’t know Andy. You look miserable. You’re hot, sweaty and will be exhausted by the end of the day. I like my idea better – play on my tablet and PlayStation, watch a bit of TV and just relax. And the best part? Tomorrow I get to do it all over again!”

Andy could see that he wasn’t convincing Greg, so he just left him with a final thought. “OK well, I have to get back to work now. I hope you start working soon Greg, because Grandpapa Ant says it’s going to be a very bad winter.”

And with that, Andy continued on another walk to the garbage heap while Greg bounded toward the field where the other grasshoppers were playing.

Many months passed while Greg played almost every day and Andy worked hard with his brothers.

Then one day, the wind started to blow and the first snowflakes of winter arrived. Andy looked up and decided he’d gather a few extra scraps of food while he could, then quickly shuffled inside to make a nice fire for his family to enjoy.

A couple weeks passed and the small sprinkling of snow eventually accumulated into large drifts.

Andy didn’t seem to care though – he was sitting inside his warm house and playing a board-game with his family.

Suddenly, there was a knock at the door. Upon opening it he was shocked to see Greg!

Greg was shivering and quite thin. “Andy, can you please help me? I ran out of my food and twigs so I’m hungry and can’t even keep a fire going.”

Andy exclaimed “You had the entire summer to gather that stuff, Greg! Why don’t you have enough now?”

Ashamed, Greg fessed up “I did a little work, but it looks like I didn’t do enough.. I was planning on working more but I never got around to it. It was just so fun to play video games and watch movies. Plus I really like to swim. A lot.”

“Apparently so Greg! It seems you like to play too much. Even though I worked all summer I only have just enough food for myself and my family. I can spare this small scrap of half-eaten bread though. Since the snow has fallen, it’s too late for you to gather food and twigs so I think the only thing you can do is to go to the bug shelter. They may at least have a small room for you and perhaps some cold soup. It won’t be a fun experience, but a least you’ll live.”

And with that, they shook legs, and Greg set out across the snow toward the bug shelter where he would spend a cold, miserable winter.

“Who was that, dear?” Andy’s wife asked.

“Just a poor soul who never learned the value of hard work. He thought he could get through life by playing and never taking responsibility so now he suffers.”

And with that, the Ant sat down at the table, warmed himself next to the fire, and finished playing a boardgame with his family.

At that very moment Greg was being shown his hard, cold bed in a room he had to share with ten other grasshoppers at the bug shelter.

The Boy Who Cried Wolf
Scroll to top